Horrifying footage has captured a machete-wielding teenager and his friends chasing a driver before stabbing him and stealing his Porsche in Melbourne as the city was rocked by a weekend of violence.

CCTV captured the alleged attack which took place outside a petrol station on Stud Road in North Dandenong at 10pm on Saturday.

Police are investigating whether the incident was linked to one of several fights that took place the same night with three separate assaults that rocked the city, where one was stabbed to death and seven others were transported from hospital emergency. 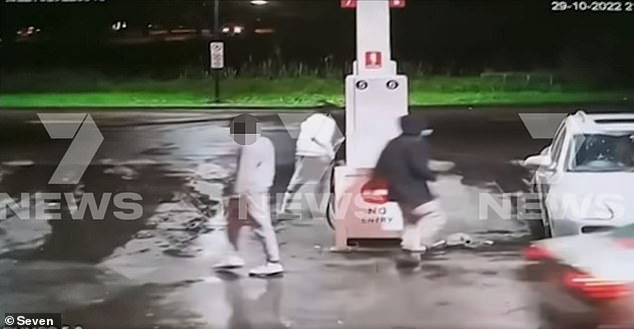 One was on King Street, another on Bourke Street and the third 0.8 miles away in Southbank, with the incidents taking place in the early hours of Sunday morning.

The alleged carjacking at the gas station resulted in the 53-year-old being stabbed multiple times while his passengers, a 25-year-old man and a 41-year-old woman, were unharmed.

Footage showed the group of teenagers dressed in tracksuits approaching the Porsche which was parked next to a gas pump.

One of the alleged attackers was seen wielding a machete.

The passenger could be seen running for her life when the car door was opened before the group piled into the luxury vehicle.

Police later found the allegedly stolen Porsche abandoned more than 30km away in Queen Street just after 3am on Sunday.

A 17-year-old boy has been charged with aggravated carjacking, motor vehicle theft, willful and reckless bodily harm, assault in company and assault with a weapon.

A 15-year-old boy has been charged with aggravated carjacking, motor vehicle theft, affray and assault with a weapon.

Both teens have been remanded in custody and will face juvenile court at a later date. 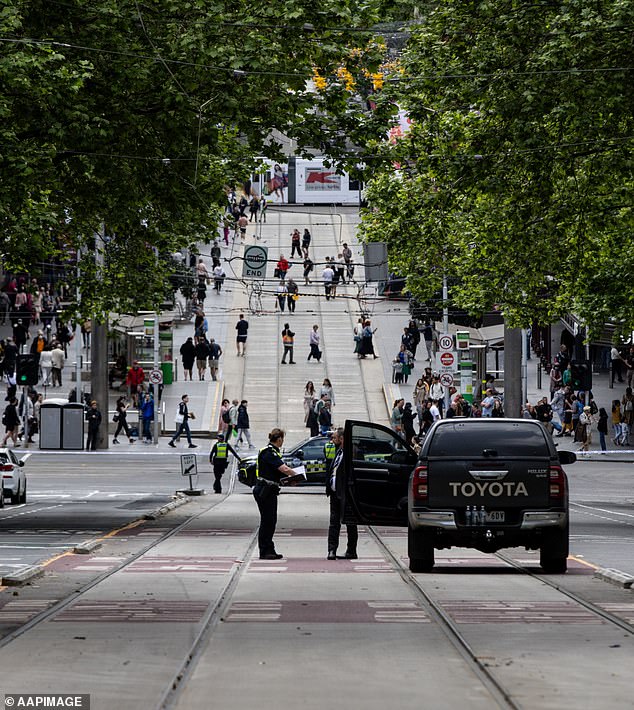 Two men have been rushed to hospital after being stabbed in Melbourne’s CBD. Pictured: Homicide Squad detectives on Bourke Street on Sunday morning

Police set up separate crime scenes to examine the two downtown stabbing incidents and spent the morning searching for evidence as detectives worked to identify the offenders.

In the fatal incident, emergency services were called to Bourke Street around 5.45am following reports of an assault.

Two men were found with stab wounds and were rushed to hospital in critical condition, where one of the victims, who has not yet been officially identified, later died.

The second man, in his 20s, remains hospitalized in stable condition with upper body injuries.

CCTV footage showed the fight breaking out outside the McDonald’s at the Hardware Lane intersection as several men threw punches at each other.

A man in a white shirt falls to the ground and is kicked as he is knocked down by two men before jumping up and running away. 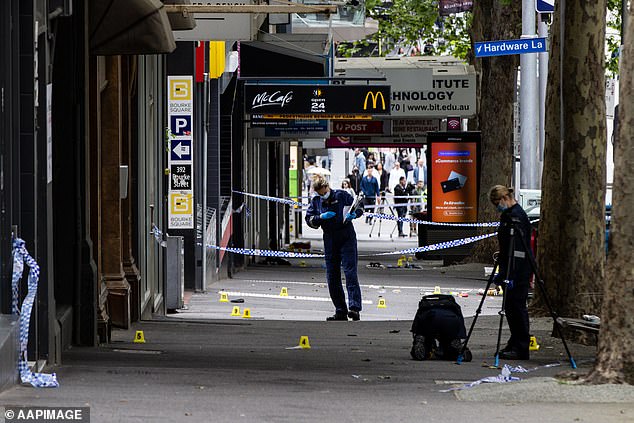 Pictured: Police recorded the crime seen as they scoured the scene for evidence on Sunday

Homicide Squad detectives have launched an investigation, with the exact circumstances surrounding the incident yet to be determined.

No homicide arrests have been made at this stage, but a 19-year-old man was arrested at the scene for brawling and is assisting police with their investigations.

Detectives recorded Bourke Street between Elizabeth Street and Queen Street on Sunday as they examined the scene.

Acting Victoria Police Superintendent Troy Papworth has confirmed the man accused of the stabbing is still at large.

“(The alleged assailant) entered the city, intending to commit this offence, he then fled the scene, and our police are still looking for these things where members of this group are involved,” he said. he declares.

Earlier on Sunday, two men were found injured about 300 yards away after a violent fight broke out outside Inflation nightclub. 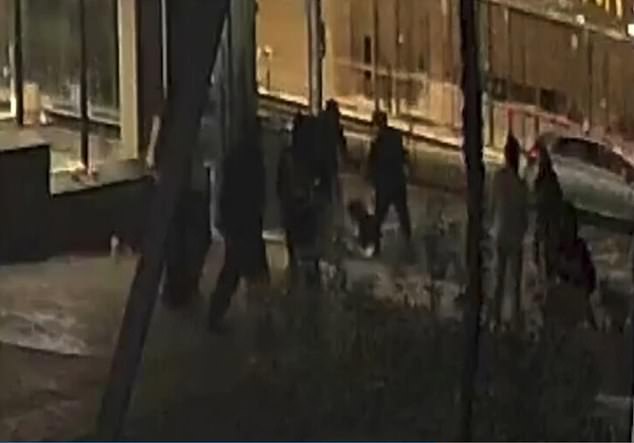 Footage shows the fight broke out outside a Bourke Street McDonalds around 5.45am on Sunday 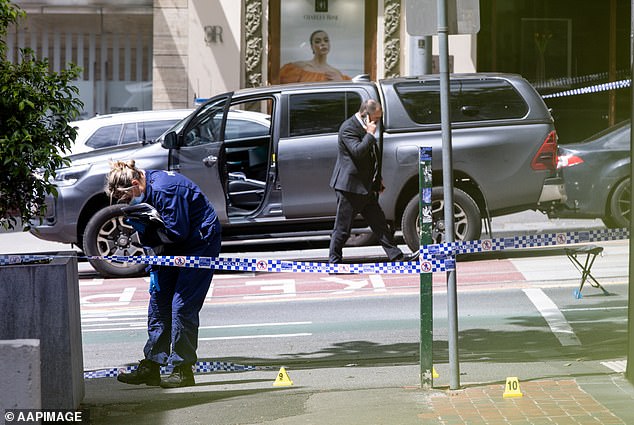 Victoria Police are urging anyone with information about either incident to come forward. Pictured: A police officer takes a photo of the Melbourne CBD sidewalk on Sunday

Police said the men were discovered with stab wounds at 1.25am following a large brawl at the intersection of Flinders Lane and King Street.

A 19-year-old man believed to be seriously injured and an unidentified man whose life is in danger have both been taken to hospital.

A crime scene has been set up and the area cordoned off while detectives examine the scene, with officers from the Major Crime Scenes Unit also set to attend.

Police are investigating whether the two stabbings hours apart are related and CCTV footage from the council and local businesses is expected to play a major role in the investigation.

Photos taken at the scene showed blood smears on a car parked outside the nightclub.

Acting Superintendent Papworth said around eight people were believed to have been involved in the King Street assault.

“We have investigators working to identify a number of incidents that resulted in the death of one young man and serious injury to several other young men,” he said.

“The separate incidents have not been linked at this stage. 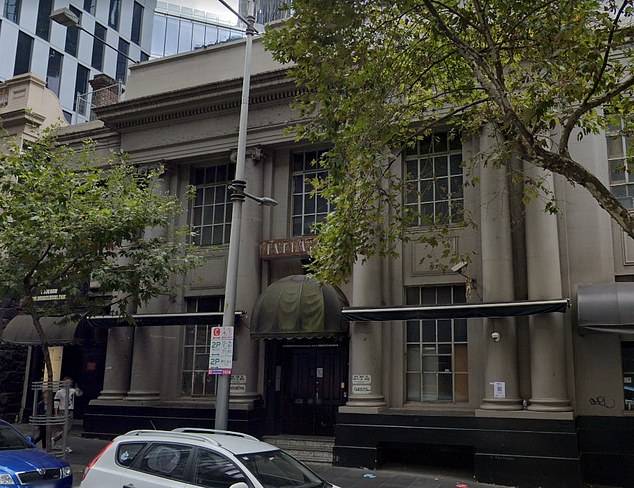 Police are investigating whether the two stab wounds are related. Pictured: Inflation nightclub on King Street in Melbourne’s CBD 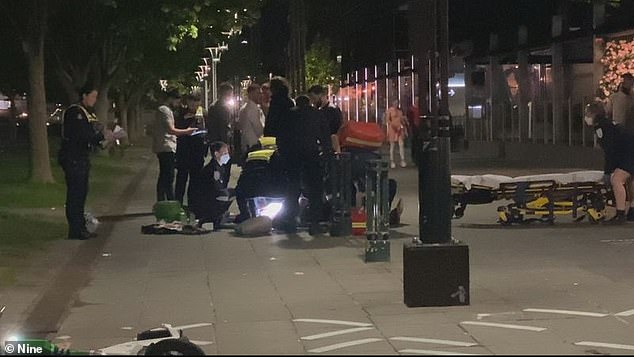 Pictured: Emergency services personnel witness an assault in Southbank around 12.40am on Sunday

“I assure you that we will crack down on people who continue to enter the city and bring violence with them.”

In a third earlier incident, three men were injured after an assault in Southbank.

Police were told two groups of men appeared to be arguing as they left a bar along Riverside Quay around 12.40am.

The argument reportedly spilled onto the boardwalk path, where three men were attacked by two other men.

A 25-year-old man from Springvale was punched heavily in the face before falling and hitting his head on the ground.

The other two men, aged 24 and 25 from Keysborough and Cheltenham, suffered facial injuries.

The two men who police said appeared to be the attackers fled the scene.

Anyone who witnessed any of the incidents, has video footage or further information is asked to contact Crime Stoppers on 1800 333 000.